As Drake Music Scotland celebrates 20 years of pioneering work, we hear from Chief Executive, Thursa Sanderson, on the role Figurenotes has played.

From its establishment in 1997 Drake Music Scotland’s primary purpose was to create music-making opportunities for disabled people of all ages. For the first 10 years this was primarily achieved through the use of accessible music technologies, giving those with limited mobility and co-ordination the means to control musical sounds and express themselves creatively. As well as working with physically disabled people, we also provided opportunities for those with learning difficulties. Many of these were able to play conventional musical instruments, but the main issue for us was how best to help them develop musical skills.

The ability to read music notation is a fundamental aspect of learning to play an instrument and joining in music making with other people. Notation presents a barrier for many learners – not just those with disabilities – and we hadn’t found a way round this. We relied on different approaches to music making, such as improvising, rhythm games, playing by ear, and creative composition using alternative notation such as graphic scores.

In 2008, we became aware of Figurenotes and, since that moment, this colourful notation system has had a major impact on our work. Our former Artistic Director, Brian Cope, went to Helsinki, where Figurenotes was invented and developed by Markku Kaikkonen and Kaarlo Uusitalo with their pupils at the Resonaari Music School. He returned to Scotland enthused by its simplicity and effectiveness, and we didn’t look back. Although other colour-based systems have been created, Figurenotes presents all the fundamental features of notation in a clear and accessible way, and at the same time allows learners to progress through three simple stages towards standard notation. Following our ‘Inspire’ pilot project, testing Figurenotes with a variety of learners from young children to adults, we needed no further convincing. Our mission was to introduce it to Scotland, make it more widely available by creating Figurenotes software and resources, and bring music leaders and educators on board with this revolutionary, but simple tool. 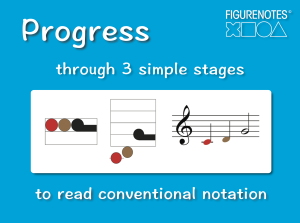 Over the last ten years, Figurenotes has had a pervasive and positive effect on all aspects of our work. As we reach the major landmark of our 20th Anniversary Concert, putting disabled musicians ‘Centre Stage’, it is enlightening to assess the impact it has had. Rather than being a dramatic ‘solution’ to everybody’s needs, there has been a gradual growth of confidence in our flexible methodology. A combination of the right kind of open-minded, creative and versatile people – musicians and music educators – with the best combination of tools, teaching practices and technologies to create a holistic approach that can be adjusted to meet the needs of any learner, seeing opportunities instead of obstacles, and allowing people’s potential and talent to be realised.

We have had many successes with Figurenotes, both on a small individual scale, at organisational level and in terms of the wider sector both here in Scotland and further afield. Creating a list of our ‘Top Ten’ achievements with Figurenotes is nearly impossible, but here we highlight some of the major ways we have helped our participants realise their potential with the brilliant Figurenotes system over the last 10 years: