We have had a few requests for blogs focusing on using Figurenotes with different instruments. I’d like to start, as a violinist, with strings.

There was a wonderful pilot project, when Figurenotes first came over to Scotland, at Greenmill Primary School. This research project was a joint venture between Drake Music Scotland, RSAMD (now RCS), and East Ayrshire Council. Chris Gray, now a Programme Director and Senior Lecturer at University of Aberdeen, brought together two groups of musicians in their last year of primary school. Each pupil was given a string instrument to play in their new string orchestra. One group learned using Figurenotes and the other learned using standard notation.

‘The Figurenotes class progressed in relation to reading and rhythmic security at least two months in advance of the class learning with conventional notation.‘  (Christopher Gray, Greenmill Strings Project Report)

‘Figurenotes as a method also supported the development of bowing technique, with particular reference to bow distribution and control. The visual relationship between Figurenotes and bowing technique ensured that students in the Figurenotes class found it easier to develop these skills.’ (Christopher Gray, Greenmill Strings Project Report)

This orchestra have now played with Nicola Benedetti, Colin Currie, Sir James MacMillan, and many more! They’ve played at both Holyrood and Westminster parliament buildings. All the musicians have progressed on to standard notation, with the Figurenotes group never losing that strong sense of rhythm they built up at the start of their learning. Take up of non-string instruments has also increased, so music provision in the area has improved and more people have access to music. A huge success! You can catch these pupils playing at The Cumnock Tryst on Friday 29th September.

So how do we set up string instruments? We start with open strings. Place a sticker at the end of the fingerboard, nearest the bridge, for each string. Some people like to place the open string stickers on the bridge itself. Take a look at the photos below to get a better idea. You can play using just these stickers for a while, to build up your technique and sense of rhythm and pulse. This also helps to focus your pupils eyes on the point where the bow meets the string, which is helpful in creating a good tone and bow control.

When you are ready to proceed to using fingers, try placing stickers on the ‘natural’ notes. This is slightly different to the way a lot of teachers use stickers on string instruments. Often we will place stickers where the fingers will go. By using the natural notes, you are encouraging the ear, while sneakily managing to teach a little music theory at the same time. Take a violin E string, for example; as a beginner, we will learn to play an F# on this string before we learn F. In Figurenotes, an F# is blue with an upwards arrow. If we are teaching this upwards arrow from the start, accepting this as an F# and knowing what that means in practical terms, we are sneaking in these abstract concepts in a very concrete way from the beginning.

You can find some easy violin tunes, using open strings to start, within the Resource Base. Look under ‘Tunes – Other’ and they are in the ‘Beginner Violin’ section. I will be adapting these for viola, cello, and double bass in the near future, but you can use the Figurenotes software to do this straight away. Let me know how you get on! 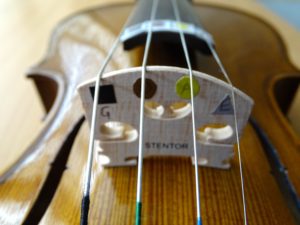 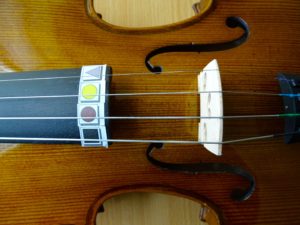