Mark Browne and Jill Reeves have been using Figurenotes to great effect at Craigmarloch School, so we asked them to share their experience.

Figurenotes has revolutionised music here at Craigmarloch School. Its visual style and literal colour-matching logic has engaged pupils at all ages, stages and levels, and it has become integral to learning across the school. At Craigmarloch, a school for young people with a wide range of Additional Support Needs, music is a key part of the curriculum for every young person (aged 4 -18). As a teacher new to the school, and enthused by the possibilities of Figurenotes, I have been keen to embed Figurenotes within a curriculum that enables learners to achieve early to second levels of Curriculum for Excellence. I have seen for myself the difference that it has made to learning here and it has opened the door for young people to experience a much greater variety of music making experiences.

The first challenge of this was setting up the classroom and the instruments to be ready for young people to use Figurenotes from the start of the current school year. Of course, there have been colour coded notation schemes in existence before – the evidence of this was there in the many stickers that embellished the keyboards and glockenspiels throughout the classroom. In order to “launch” Figurenotes effectively, these needed to be painstakingly removed and replaced, a long and laborious process involving nail varnish remover and lighter fluid! Actually it turned out that metal polish worked best, so perhaps this is a useful “hot tip” for anyone yet to begin their journey into the realm of Figurenotes!

Having done this, it was time to create new resources designed around the new notation system. The first of these was a keyboard course that I hoped would (a) encourage young people to start with a secure hand position on notes C to G and (b) enable pupils with a range of abilities to be able to play together even at an early stage in their learning. With its three distinct stages, Figurenotes seems custom built for differentiation and this has meant that more able pupils would be able to see the progression to standard notation. So I began the process of composing simple keyboard pieces – with silly titles like “Semibreve Siesta” – and printing them in all stages of Figurenotes. The course comprises seven pieces – the first four of which can be played together – and move to an arrangement of the Largo from Dvorak’s New World Symphony. All pieces involve fingers 1 to 5 in the right hand and gradually progress from a first piece using four beat notes only to the final piece using a range of different note lengths.

Figurenotes has also been embedded into more diverse schemes of work. A unit on riffs and ostinatos was produced, using Figurenotes exclusively. A study of Mars from the Planets involves clapping the opening rhythm using Figurenotes – a challenge to create, using a 15 beat bar; not the way Holst wrote it of course, but effective and accessible – while later on in the unit, differentiated parts for Billie Jean and Smoke on the Water were produced.   One of the most popular recent songs in the school, Uptown Funk, forms the final group performance of the book. The different riffs are presented separately with a final “solo” keyboard version using Stage 3 of Figurenotes. 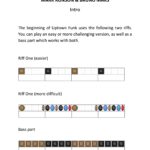 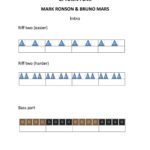 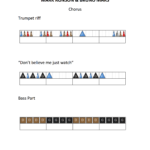 Doing this can all be achieved by simply using the Figurenotes software, but if you want to get your musical examples into a booklet format, using the screenshot tool in Microsoft Word and selecting screen clipping means you can do just that. This enables you to add (for example) pictures, words of explanation, cross-referencing numbers linking to Experiences and Outcomes (!), or artistic use of borders and shading. The same method can be used to insert music onto PowerPoint, especially useful if you are guiding learners through a unit and are using Figurenotes to exemplify particular concepts.

None of this seems revolutionary in any way, but I hope this has shown how Figurenotes can be used as an intrinsic part of the music curriculum, rather than as an add-on extra. At Craigmarloch, standard notation still forms part of the music curriculum, particularly for more advanced learners, so it was important to me that any new notation system would form part of a logical progression to reading and understanding standard music notation. With its different stages, Figurenotes does offer this, and it gives all learners – with or without Additional Support Needs – an accessible way to enjoy, and benefit from, a diverse range of musical experiences.

We’ll make all of Mark’s resources available through the Resource Base, so you can download them and get cracking. Don’t forget to order your stickers for the classroom and download the software to help you create resources of your own. Thanks for sharing, Mark.